A downloadable game for Windows

Punch A Bunch is a physics-based boxing game developed by Pontypants.

About the current build:

This is the first build ever released where you just fight against an invulnerable dummy.  The purpose of this build is for anyone interested in the project to test out the controls and fighting mechanic to give feedback.

Further builds will be coming soon with more features implemented in the game.

->YOU NEED A JOYPAD/CONTROLLER TO PLAY <-

make a tutorial for the different punches(aka hook, overhand, uppercut)

Are you a troll? Read the page lol.

Edit: Ok so this should have like, some slight info on how keyboard and mouse work.

I've already watched that video but thanks for the help anyway. What I'm trying to find is an actual tutorial like how to combine leaning and punching to create a strong attack.

tilt back then tilt forward plus jab equal overhand

is there a way to download older versions?
older demo versions

Man... It's a great game! However,  controversial to popular belief, I don't think local multiplayer should be added to the demo. It should be in the full game. If not, people can just run off with the demo.

Aside from that, beautiful game. Great Developer

can you please add local multiplayer to the demo????

i found out that the game is uncooked, and i cant run it i need the creator to fix this issue. please fix it

i tried opening the game and it said there was an error or idk can someone help me?

its says i need a cooked version. someone knows how the hell i can fix that?

Super game bro! I really like how the controls feel and how well the game runs. I can't wait for the game to launch

Okay, so right off the rip, I had an extremely difficult time trying to beat Toby, which is supposed to be beginner mode. I don't know if it's because I'm not used to the controls yet, or what, but I feel as though the damages of the punches should be increased or Toby's health should be decreased for the sake of it being beginner. Another thing is I feel like Toby's health is regenerating. This can be frustrating when you're going to block or get away while you're stunned because it gives the enemy's health time to regenerate. You should probably take that feature out. All in all, good game. Also, use a save game blueprint to save the settings so that way players don't have to keep adjusting the settings every time they start a new game or restart a new game. It gets annoying after a while when you have to pause just before you start the game to adjust settings or use legacy controls.

coming from youtube, way better than I expected. online multiplayer option would make this game a blast

kinda sucks idk if its just me

been watching since the start 2 whole years ago, love to see this game finally playable even if its still not done!!!

The game is kinda hard. I get damaged when I defend myself.

I think that it would be better if you made the UI interactable with the controller, and then why not but upload the game onto the PS5, PS4, and The XBOX store, you would (probably) get more MONEYYYY

it cost money for PlayStation it cost $10,000 for the license also in his videos he explained that he quit work for this game, so he probably doesn't have money like that laying around to publish it on those platforms

maybe it's just me but my controller doesn't work

MAC VERSION PLEEEEEEEEASE!!! I BEG YOU!!!

Yeah same here, want to try it out as well...

YOOO I'd also like a MAC version, let's make some NOISE so Ponty makes one :D!!!

The enemies are literally invulnerable it says it in the description.

"This is the first build ever released where you just fight against an invulnerable dummy."

i cant damage the people

Yes, you cant damage people because it says in the description that the enemy is invincible.

Been playing for about a week now. Started with a Ps4 controller but I discovered that you can play using WSAD for movement, Space-bar for dodge, Left MB for Punch, Right MB for blocking, and basically moving the mouse to sway.  This is the result xd. 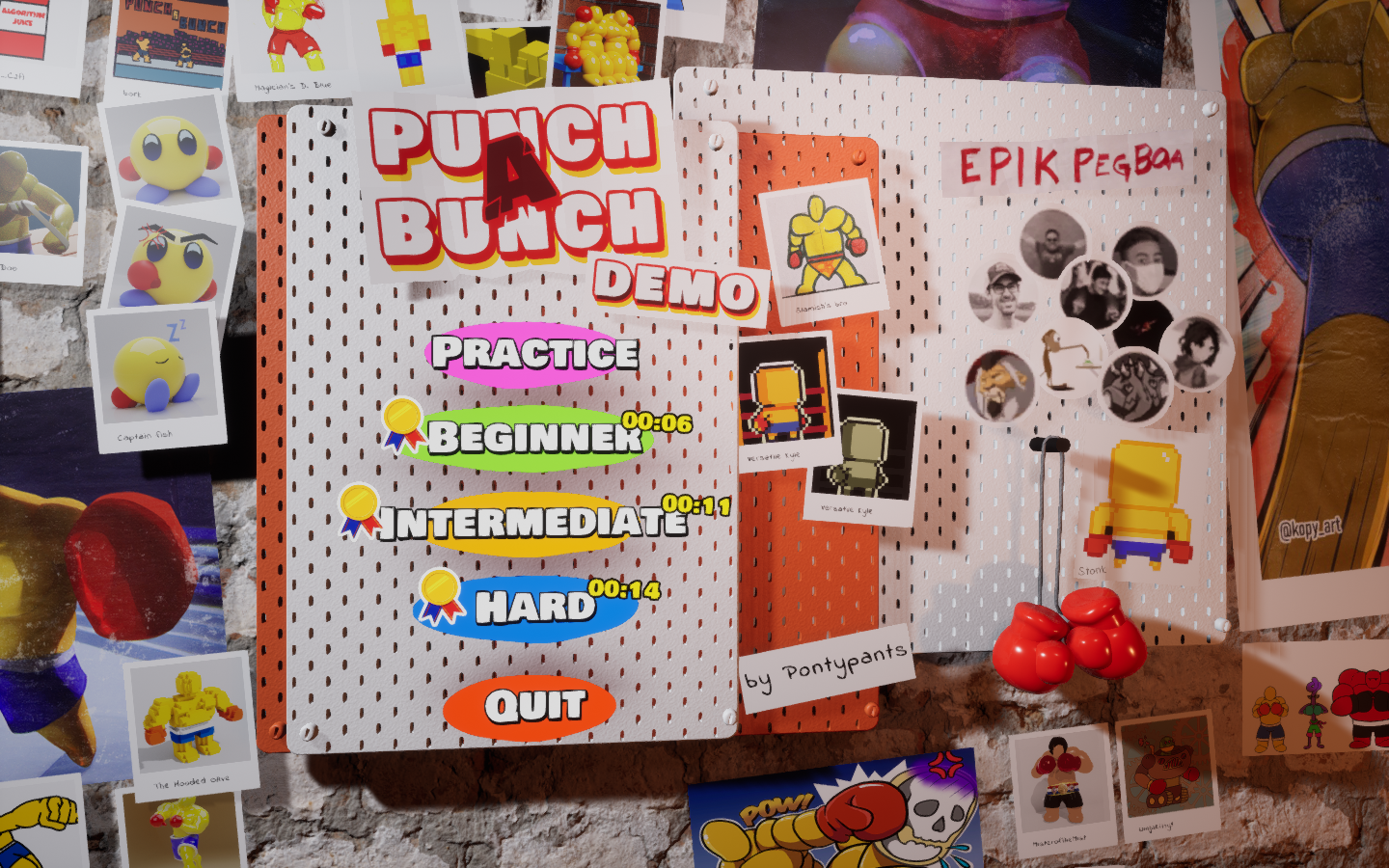 The controls are really hard but just like other games, you can get good with it by just playing the game. That said, I still have trouble throwing uppercuts.

I grew up playing boxing games like the Fight Night series that had both motion-input and simpler punch buttons (see image below).

What I'm trying to say is, I think it's fine to have both types of controls so that the game would be more beginner-friendly. And that choosing to practice and eventually master the motion-input controls would mean that you would have more offensive options unlike those who only play using the simple buttons.

That is pretty much it. Thanks for a great demo!
Can't wait for the STEAM release.

For a demo...well it's pretty good. I honestly can't wait for the final version of the game to be released. It is hard, but it's interesting too. In the meantime of your match you start to learn your opponents strategy and moves and then make your own plan on when to hit and how to hit. The easy mode is really simple, you throw some jabs and some wide swings and you're good to go. But for the intermediate and hard mode it's really different, you have to be an out-fighter for both modes. In the intermediate mode you just tire the opponent with blocks and then hit him with some swings(they have to be clean hits, otherwise the opponent is going to take small damage). Now for the hard mode, it's pretty much the same as for the intermediate, the advantage is that he tires out more quickly, but the problem is that he has a special attack. Of course, you can neutralize that special attack with some clean hits most of the time, but you have to be careful too so you won't get hit if you don't succeed in neutralizing the special attack. The potential this game has from all points of views is enormous. Knowing that just ONE developer works on this game gives me the chills. The things I would like to see in the future are some basic things from boxing, like footwork for exemple(they don't need to be complicated footwork like in real boxing), and the uppercut would be a great attack to have by neutralizing the opponents block and hitting him at the same time with a lot of power with this attack, but the disadvantage you would have is the lack of stamina. Can't wait for future updates on this game and new demo's to play until the full version releases.

Really cool game, At first. I am no rager, in fact, I only raged a bit once in 6 years of my gaming history. I broke my monitor today, this combat system gave me a stroke and the dead brain cells are continuing to kill the surrounding cells. The constant repetitive parrying in the intermediate and hard mode really sucks but I know you are improving it now so no hate from me. But really, it sucks that I broke my new monitor cuz I just got a few months ago and I was super excited ;C.

use this note for setings

I would prefer if advanced controls use A&B instead of LB&RB to hit.

Also it's really hard to aim with hits, I found that for me aiming is a lot bigger problem than "complicated" controls.  Like even in the practice I can't figure out how to hit dummy right in the middle of it's face/body. Not to mention during normal fight.

Hey Ponty, I have played this game for a couple of hours, and I think this game is loads of fun and has a lot of potential. there's a couple of things that I would like to point out that I found could be changed or improved.

to start off I think that the new control scheme is a lot better but for some reason the leaning mechanic is still kind of weird for me (maybe I just need more practice with it, but I thought I should still point it out just in case someone else feels the same way). I feel like being able to see the Boss' stamina bar could be a very good addition so that the player has an idea on how close the boss is to running out of stamina.  I really think that this game needs some sort of tutorial that teaches you the mechanics of the game (I don't think I would've been able to learn how to throw punches if it wasn't for your YouTube videos on this game) as well as a better practice dummy (maybe something like street fighter were you can tell the dummy to block a certain way or something). I also think the game might need some optimization, my graphics card was running at 100% the whole time (even in the title screen) and I have a 1070.

when paused your stamina regenerates.

Overall, I rate the game a 7/10 in its current state. I think this game is amazing and I am excited for when it is officially released

What requirements are need to play the game,my pc is old,if i not have the requirements you can create a low graphic version for not make my pc explode plis?

I really like this game and am rooting for you.

I think you need different keyboard-only controls (I'm trying to play on my laptop in my lap, so touchpad doesn't work for current control scheme like right click for blocking doesn't allow you to hold)

Maybe something like C for left punch, V for right punch.

Another way to handle it so that it still works with a touchpad:

moving mouse with touchpad for leaning 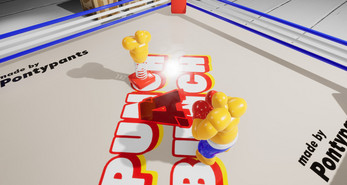